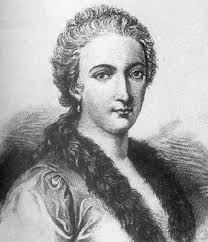 Born in Italy on May 16, 1718, she was the oldest of 21 children (her father had three wives). Because her father was a wealthy man, he was able to provide his children with the best of tutors.

Maria was lucky that she lived in the birthplace of the Renaissance because in Italy women were admired for their academic ability and were never scorned for their intellect. This attitude allowed Maria to prosper and eventually become a great mathematician.

By the age of nine Maria fluently spoke French (which she mastered at age five!), Greek, Hebrew, Latin, and other modern languages. She was known as a child prodigy and referred to as the “oracle of the seven tongues.” Also at the age of nine, she wrote and published (with the help of her tutor) a Latin discourse on the higher education of women as it was not practiced at the time.

Maria was a quiet and reserved child, but participated in the seminars and meetings of intellectuals that her father hosted. There she discussed philosophical and mathematical ideas. At the age of twenty, however, after her mother’s death, Maria took over the household duties and maintained a private life.  At the same time, she published a set of essays on philosophy and natural science called “Propositiones Philosophicae.” Much of it was based on the meetings she attended with her father.

Her most important work, a two volume book entitled “Analytical Institutions”, focused on differential and integral calculus. It was meant to be a textbook for her brothers but ended up making big waves in the world of academia. The ten years it took Maria to write it paid off because it helped bring “calculus to general use” (John H. Lienhard) and “was one of the first and most complete works on finite and infinitesimal calculus” (Agnes Scott College).

Drawing the “Witch of Agnesi” curve

Most people don’t hear of Maria Agnesi, rather they hear of the “Witch of Agenis”, her famous curve. If you look at the curve, there is nothing sinister about it. It is a versed sine curve called a versiera for the Latin vetere which means “to turn.” However, versiera was also an abbreviation for the Italian word avversiera which means “wife of the devil.” When versiera was translated into English it got confused with “witch.” If you want to learn more about this curve check out http://mathworld.wolfram.com/WitchofAgnesi.html They can explain it better than I ever could wish.

May notable institutions recognized Maria Agnesi for her work. Maria was appointed as an honorary reader at the University of Bologna by Pope Benedict XIV. She was later sent a diploma and her named was added to the faculty list but there is controversy regarding if she accepted the position. Maria also became a member of the Bologna Academy of Science and the French Academy expressed their admiration but could not admit her because she was a woman.

Once Maria’s father died, she retired from mathematics to pursue charity work. Growing up she wanted to enter the covenant, but her father would not allow it. So, she spent his life making contributions to mathematics and then the rest of her life after his death taking care of the ill and dying. Some may argue that she only really worked with mathematics to please her father and that her real passion lied in charity.  In 1763, the University of Turn asked her for her opinion on recent articles on the calculus of variations she explained she was no longer interested in such topics. Maria was appointed the director of the Pio Instituto Trivulzo, a home for the ill, and served the needy until her death.

For more about Maria:

Scientesses is a play on the word princesses. The goal of this Girl Scout Gold Award project is to get girls excited about possible careers in the STEM fields.